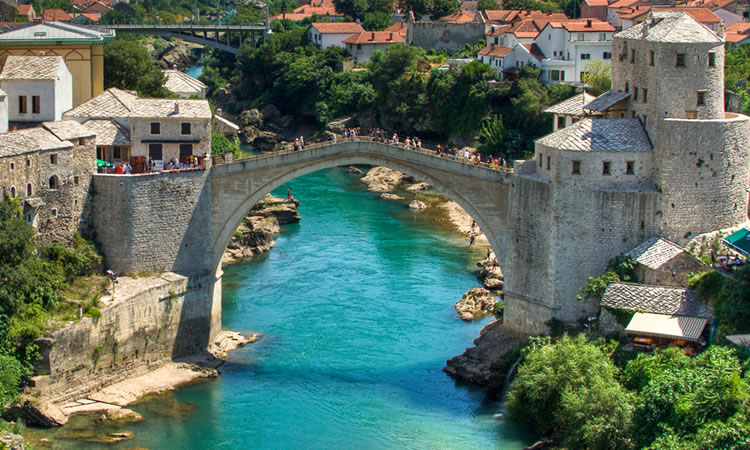 Herzegovina is a country of great natural wonders, rivers rich with water and mix of cultures all living under the same sky! Take the tour with us and get acquainted with the lifestyle of people of Mostar – a city of Muslims and Christians living on a different bank of River Neeretva, connected by Old Mostar bridge but devided by river Neretva and strong ideologies deeply embedded in both nations.

The city of Mostar is situated in a beautiful valley bedded between high mountains of Herzegovina. It is thanks to the river Neretva that Mostar was able to develop as a city in the desert-like landscape of Herzegovina. Neretva’s size turned Mostar very early in to a trading centre of the region. What makes this city known is it’s famous bridge. The Old Bridge was built by the Ottoman empire in 1565. It was the great architect Mimar Hajrudin who had succeded with the impossible mission to cross the Neretva river with a single span stone bridge.

Old Bridge Area of the Old City of Mostar

The historic town of Mostar, spanning a deep valley of the Neretva River, developed in the 15th and 16th centuries as an Ottoman frontier town and during the Austro-Hungarian period in the 19th and 20th centuries. Mostar has long been known for its old Turkish houses and Old Bridge, Stari Most, after which it is named. In the 1990s conflict, however, most of the historic town and the Old Bridge, designed by the renowned architect Sinan, was destroyed. The Old Bridge was recently rebuilt and many of the edifices in the Old Town have been restored or rebuilt with the contribution of an international scientific committee established by UNESCO. The Old Bridge area, with its pre-Ottoman, eastern Ottoman, Mediterranean and western European architectural features, is an outstanding example of a multicultural urban settlement. The reconstructed Old Bridge and Old City of Mostar is a symbol of reconciliation, international co-operation and of the coexistence of diverse cultural, ethnic and religious communities.